The government has stepped up measures to contain the coronavirus or Covid-19 if the country reaches Stage 3, a full-blown pandemic, with the first measure to use a newly built hospital to treat only Covid-19 patients, as the number of infections jumped alarmingly to 114 yesterday.

The premier mentioned the prospect of moving to Stage 3 after chairing an urgent meeting on Sunday to step up measures to stop the spread of the new coronavirus. The government will “spend all the resources we need” in the fight against Covid-19, he said. 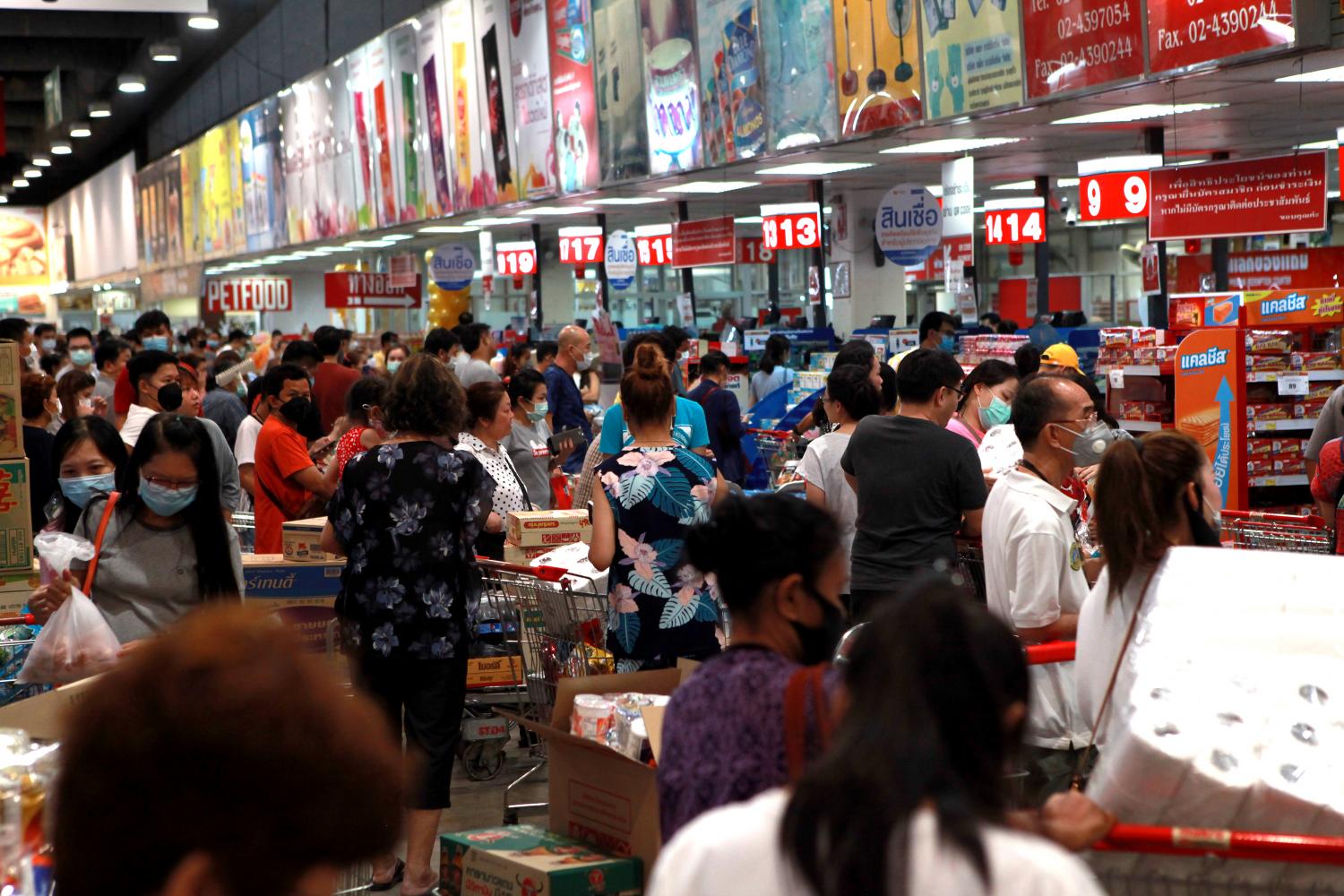 (Retail shops and supermarkets in Bangkok are crowded after people stockpile instant noodles, canned foods and other basic goods, )

In case Thailand enters Stage 3, in which people including those with no previous trips to virus-hit countries catch the disease, a dedicated hospital is needed, Gen Prayut said, referring to a new 100-bed hospital which has yet to officially open.

On March 12, Interior Minister Anupong Paojinda, who also attended the meeting on Sunday, said the government will use the City Hall-run Bang Khunthian Hospital in the seaside district of Bang Khunthian to treat Covid-19 patients.

The two-billion baht hospital was originally planned as a specialist facility for the elderly.

Besides hospitals, Gen Prayut also told state agencies to brace for a worst-case scenario of the viral outbreak. Those involved in security must think whether they need to enforce new legal measures to cope with the situation. “It’s easy to announce them, but we also need to gauge their impact,” he said.

Pub and entertainment venues may need to be temporarily closed after recent cluster infections involving people drinking together in a pub, he said.

Officials will first opt to seek the cooperation from pub owners, but “all must be closed if necessary,” Gen Prayut said, adding the action will be based on advice of medical experts.

Today the Public Health Ministry will suggest the government close venues with a high risk of spreading Covid-19 and cancel activities that draw a large number of people, permanent secretary for public health Sukhum Kanchanapimai said.

The prime minister on Sunday also tried to relieve public concerns over a severe shortage of face masks and the cost of disease treatments.

The government is checking the total amount of face masks, both domestically produced and imported, to make sure everyone can get access to them, he said, adding officials are also developing “alternative masks” or washable cloth masks, for people who are less exposed to the disease.

“We’re also applying UCEP to Covid-19 patients,” Gen Prayut said, referring to the Universal Coverage for Emergency Patients (UCEP), which has listed Covid-19 as an emergency case enabling patients to seek treatment at their nearest private or state hospitals free of charge in the first 72 hours.

Usually people who are first admitted to private hospitals may later need to relocate to public ones to draw down on medical welfare, but in the case of Covid-19, “the prime minister and the public health minister agree they can continue to stay at private hospitals and pay nothing”, Dr Sukhum said.

However, for diagnosis, the government will only cover the expense incurred for people in risk groups who show Covid-19 symptoms.

This condition must be changed, Yong Poovorawan, chief for Chulalongkorn’s Centre of Excellence in Clinical Virology, Department of Paediatrics of Faculty of Medicine, suggested on his Facebook page. “That’s because everyone will risk catching the disease in the near future,” he said.

At present, people who suspect they may contract the virus are subject to medical bills ranging between 6,000 and 7,500 baht.

Dr Yong on Sunday also asked the government to consider postponing the Songkran holidays in the middle of next month to help contend with the viral disease.

The number of patients in Thailand has remained relatively low, compared with those in other countries, until the numbers sharply spiked late last week. The country’s two-month “rehearsal” to contain the virus spreading has just ended, Dr Yong said.